There’s always something to worry about when it comes to the stock market, but panic selling all-too-often ends in disaster. That, Larry Swedroe writes, is why it’s so crucial for investors to have a prudent, well-thought-out financial plan in place. 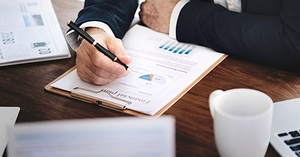 As the director of research for Buckingham Strategic Wealth and The BAM Alliance, whenever markets head south for an extended period, the number of calls I get from clients and other advisors jumps. This time is no different.

With that in mind, I thought it important to share how investors should be thinking about the recent drop. To begin, there is always a reason for investors to worry about the stock market, be it valuations at historically high levels, the economy, the risk of inflation or geopolitical risk. That is why there is an equity risk premium, and why historically it has been large enough to be called the “equity premium puzzle.” It’s also why it’s often said that “bull markets climb a wall of worry.”

While the news on the economic front has been just about as good as it gets, there are always things to worry about. To make sure you have a balanced view of things and are not just obsessing about potential risks, let’s first look at some of the economic news:

The bottom line is there is nothing in the economic data to indicate we’re headed into a recession that could lead to a bear market (with the stock market being a leading indicator). While the economic expansion is now 10 years old, expansions don’t die of old age. They die either because geopolitical risks show up or because the Fed tightens monetary policy, driving real rates to high levels to fight inflation.

Today the real rate on one-month Treasury bills is about zero. Even if the Fed were to raise rates three more times over the 12 months (the market currently expects a hike in December and one more next year), the real rate would still only be around 1%, which is about the historical average, and certainly not indicative of a tight monetary policy. That said, there are always things to worry about.

While we will take a look at some of the concerns investors are dealing with, the list is not meant to scare you into action. Most importantly, you need to understand that all these risks are well known by the sophisticated institutional investors who do as much as 95% of the trading, and thus are setting prices (the risks are already embedded in prices). The only way you can exploit them is to outguess the collective wisdom of the market—something very few professional investors have been able to do.

Consider that, over the 10 calendar years from 2008 through 2017, the HFRX Hedge Fund Index lost 0.4%, a period in which all major equity and bond indexes produced positive returns. For example, the S&P 500 Index returned 8.5% and five-year Treasuries returned 3.2%. Here’s the list:

Unfortunately, investors who are worried about these issues and are tempted to sell are likely subject to the all-too-human trait known as “confirmation bias”—interpreting new evidence as confirmation of one’s beliefs. Goldman Sachs likely added to their concerns, perhaps pushing them over the tipping point, with their Nov. 21 warning that “cash will be king.”

To this list of concerns, I would add the following. To rescue the economy from the financial crisis of 2008-2009, the Fed implemented policies to lower interest rates and then to keep them down.

That led many who take a cash flow approach to investing to chase yield, taking on more risk to meet their spending requirements. That led them to abandon the safety of Treasury and CD investments and to the purchase of risky assets, such as high-dividend yielding stocks, real estate investment trusts, master limited partnerships, high-yield bonds, convertible bonds and preferred stocks. The result is that investors took on more risk than they had the ability, willingness or need to take (otherwise they would have had those higher exposures to risky assets to begin with).

Such strategies work until the risks show up—and then panic selling typically occurs. With the rise in rates to more normal levels, and the recent downward volatility of the market, those same investors may now decide to flee those riskier assets. While a stock paying a 3% dividend is attractive when a CD is yielding 1%, it might not seem so when the dividend yield is 3% and the CD yield is 3.5%.

Cash flow investors bailing out of risky assets could put even more pressure on their prices than we have seen in the past few months. There is also the possibility that tax-loss harvesting could put further pressure on prices.

For many, the perception about equity investing shifts from risk (where we can calculate the odds) to uncertainty (where the odds cannot be calculated) during bear markets. We often hear commentators use phrases like “there is a lack of clarity or visibility.”

Because we prefer risky bets to uncertain bets, when we see markets as uncertain, the risk premium demand rises. It is the rise in the risk premium that causes severe markets. Note: Equity investing is always about uncertainty. It’s just that overconfidence during bull markets causes us to think about it more in terms of risk (which we tend to underestimate).

The historical evidence is clear that dramatic falls in prices lead to panic selling, as investors eventually reach their “GMO” (get me out) point. The stomach screams, “Do Not Just Sit There. Do Something. Get Me Out!”

Investors have demonstrated the unfortunate tendency to sell well after market declines have already occurred and buy well after rallies have long begun. That is why it’s so important to understand investing is always about uncertainty, and you should never choose an asset allocation that exceeds your risk tolerance (which a cash flow approach to investing can lead you to do). Avoiding that mistake provides the greatest chance of letting our heads, not our stomachs, make investment decisions. Stomachs rarely make good decisions.

I’ve also been getting questions about whether we could see a bear market in stocks accompanied by a bear market in bonds. Unlike in 2008, when safe bonds provided strong gains to help offset huge losses in equities, investors have asked whether we might have a dual bear market.

The answer is yes—it definitely can happen. However, it’s been so long since it happened that many of today’s investors either were not alive or were too young to experience the pain.

According to data from Dimensional, the last year of negative returns to both stocks and bonds occurred in 1969. In that year, the S&P 500 Index lost 8.5% and long-term government bonds lost 5.1% (five-year Treasuries lost just 0.7%).

While those losses are not dramatic, consider that, as 1969 began, the Shiller CAPE 10 was about 22. It’s now about 30. Thus, valuations could fall a lot further if risks increase and investors demand a larger risk premium.

Also, Federal Reserve Bank of St. Louis data shows the yield on the long-term Treasury bond in 1969 was about 6%. Today, yields are a lot lower. The result is not only that yields could rise much more but also that the same change in interest rates causes a larger drop in bond prices, because the duration of a bond with a lower yield is longer (the same change in yields leads to a larger change in price). Thus, it’s important to not be lulled by the relatively small losses that occurred in 1969.

The lack of a recent event (or even one investors have ever experienced) could lead many to conclude a dual bear market is so unlikely to occur again, they don’t have to consider the risks and plan for it.

Unfortunately, treating the unlikely as impossible can lead investors to take too much risk. And when the unlikely occurs, their plans can fail, or they might engage in panic selling (which is often difficult to recover from because there is never a green flag that lets you know it’s once again safe to invest).

Bear markets typically occur because something unexpected happens. Other times they occur because bubbles burst (as one did in March 2000). When bear markets occur, they can happen with great speed, as risk premiums rise quickly in the face of uncertainty, and earnings often fall at the same time. That is what usually begins the process. Unfortunately, a bear market can gain momentum as progressively more investors reach their GMO point.

Each round of selling brings in a new cohort of panicked sellers whose risk tolerance was only slightly greater. And each round brings more margin calls, accompanied by forced sales. Then momentum traders jump on the bandwagon, selling into already weak markets that often have little liquidity, leading to large daily drops. And of course, sellers harvest losses and don’t reinvest immediately (until they see markets recovering).

As another indicator of the volatility of the stock premium, we see that the gap between the best and worst years was 102.2%, more than 12 times the size of the premium itself. The worst year was 1931, when the premium was -45.11%.

Such risks create the temptation to try to time the market. However, the record of active managers able to successfully do so is horrific, which led Warren Buffett to conclude: “A prediction about the direction of the stock market tells you nothing about where stocks are headed, but a whole lot about the person doing the predicting.”

As a “timely” (I assure you my crystal ball is always cloudy) column from October 2018 pointed out, smart investors are always prepared for bear markets. Knowing they cannot predict (nor can anyone else) when they will arrive, how deep they will be or how long they will last, they simply build them into their plans.

Being prepared includes not taking more risk than you have the ability, willingness or need to take so that your stomach never takes over the decision-making. Being prepared also increases the odds you can act like legendary investor Warren Buffett, keeping your head and buying when others are panic-selling, through the act of rebalancing your portfolio.

Unfortunately, as noted in the beginning, investing in stocks is always risky—there’s always a laundry list of concerns. Thus, there’s never a green light letting you know when it’s safe to get back into equities. It’s my experience that once you panic and sell, you’re almost doomed to fail. Which is why it’s so important to have that well-thought-out plan in place.

Finally, before you abandon one strategy in favor of another, make sure you ask yourself if there is any peer-reviewed, published evidence that the new strategy (such as market timing or hiring an active manager) is a superior strategy. If there is not, why do you think you’ll be more successful? Forewarned is forearmed.

For those interested in learning how to reduce the risk of a severe bear market by diversifying across unique sources of risk and expected return, I recommend you read my book, co-authored with Kevin Grogan, “Reducing the Risk of Black Swans” (2018 edition).

The opinions expressed by featured authors are their own and may not accurately reflect those of the BAM ALLIANCE®. This article is for general information only and is not intended to serve as specific financial, accounting or tax advice.